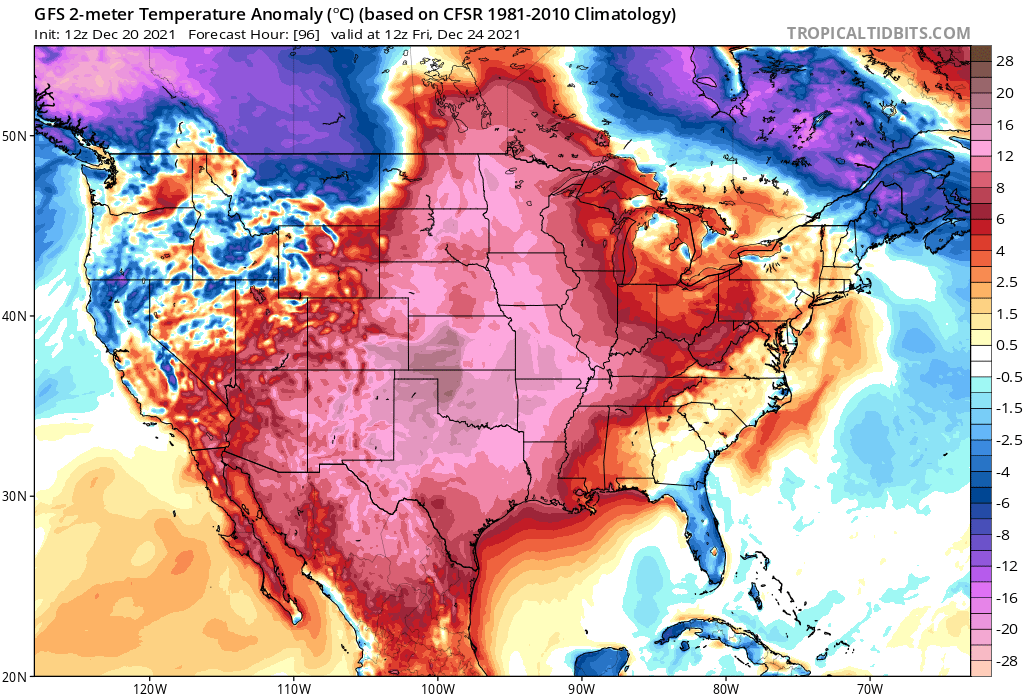 If you're looking to the weather to help you get in the holiday spirit, this may not be the year. Unless, of course, if to you the holidays means temperatures 15 to 40 degrees above average – well then, ho-ho-ho, it'll be a merry one!

The week ahead will largely feature above average temperatures across the region, and through early Thursday mostly dry conditions as well. A system swings through late in the week and will bring with it some good mountain snow, and perhaps some rain or snow to the plains as well, we'll discuss further below.

Here's a look at temperature anomalies forecast across the CONUS through December 27th. Where you see yellows/reds/(hot) pinks is where temperatures are forecast to be above average.

Christmas Eve will feature temperatures well above average for most of the CONUS, with the greatest anomalies focused over the central U.S.:

The chart below shows forecast high temperatures departure from average for select cities across the region. Denver's greatest anomalous warmth comes Wednesday and Thursday ahead of a cold front and a (maybe) chance for precipitation Thursday night and Friday. Meanwhile the southern plains will see their greatest temperature departures Friday. Yes, that's a +44°F for Salina, KS on Friday. You can create this chart with cities of interest here.

What you may see lurking in the map above is cold to our north and northwest by the end of the frame. That cold is what we'll start watching as we round out the year, as it may start to push south around the new year and start of January.

It's hard to suggest anything cold given the last months, but as far as signals go this may be the best looking cold signal we've seen in some time. If you'll recall from our winter forecast, we think eventually the cold will start to push – so we're hopeful on a few fronts this continues to show up in the data in the days ahead.

The extended GFS really shows cold overwhelming the pattern for the first week of January. Here's the 7-day average anomaly from this model ending Jan 7, 2022.

The European long-range outlook is slower with the cold, and keeps more ridging across the south, locking up the worst of the cold across the northern tier and the southern/central plains warmer.

Still, the medium range products are becoming pretty bullish the cold, so it's definitely on the table. Perhaps too far west with the cold? But you can see the potential, with this being the outlook for Jan 1 from the Euro ensemble model:

Will it be west-based? Or will the cold crash down the plains and quickly push east? There's an argument to be made for both, but we'll dive into this more as we get closer.

As for precipitation... Well, there's not a lot of it on the horizon, at least not east of the hills. The mountains will se several storms move through to end the year, which should continue to help snowpack and make for happy skiers.

Despite the warm week ahead, Denver may see some rain and snow on Thursday night and Friday as our next system moves through. The GFS is more on the rain-train for Friday, while the European is a bit cooler and has some spotty 1 - 3" totals across the Front Range. It'd be ironic if we end up with a White Christmas among an ongoing largely snowless streak and week of pretty wild anomalous warmth.

The European still puts highs near 50°F for highs on Friday in Denver, but cools us just enough with the morning showers to turn things to snow and offer a quick shot at minor accumulation across the metro area and Front Range.  Our snowfall gambler charts put the odds of this happening very low, and the GFS/Canadian models also don't show much of any snow east of the hills, but we'll watch the trends nonetheless.

For now, we hedge on the warmer/drier side for the end of the week, which likely means we won't see accumulating snow, and perhaps more rain than anything else. Still, keep an eye on the forecast just in case. If we can cool things a few degrees, and pull some moisture from the hills, then perhaps there are such things as miracles after all!