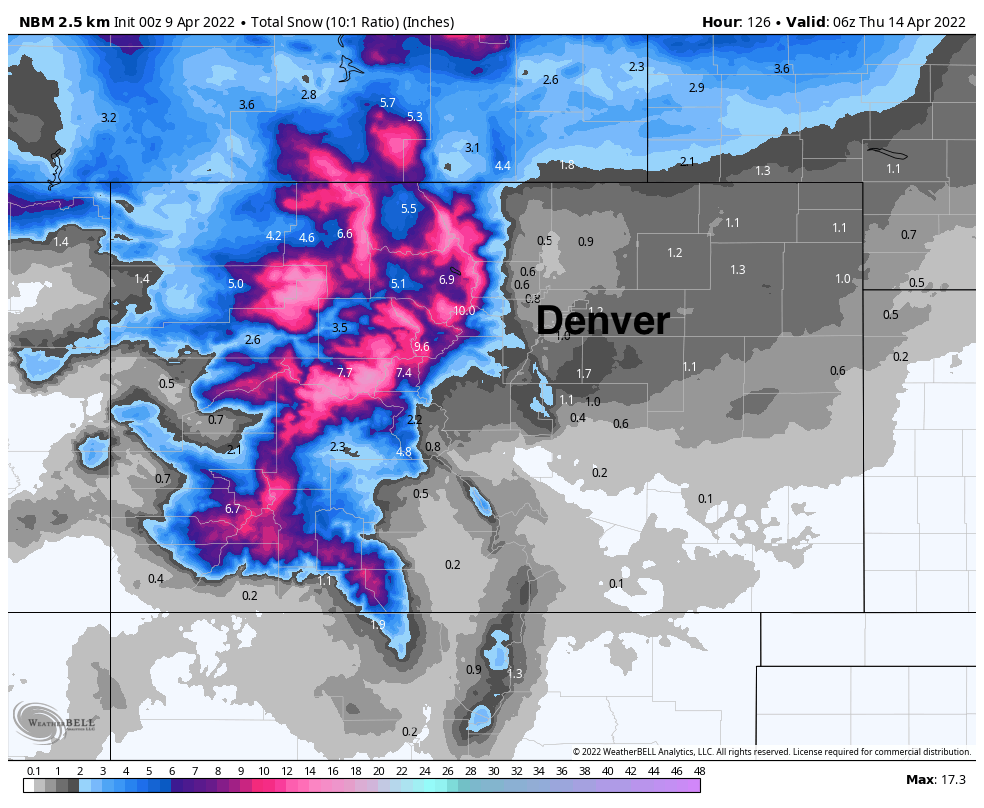 Next week's storm system looks increasingly likely to stay north; some rain and snow in the forecast tonight for Colorado

Well, you don't see this too often, but it looks like the GFS may have out-performed the Euro with regard to next week's system we discussed with Insiders a few days back.

We've seen a big shift north with the storm track from model guidance just a few days back, not just in the operational models but in the ensembles as well. Below is the 7-day mean precipitation forecast from the European initialized on Thursday morning, note the yellows (1.0"+) across Northeast Colorado:

As of last night, the new 7-day precipitation map looks dramatically different, with some good moisture for the north-central mountains of Colorado, but the bulk of the heavy precipitation missing the eastern half of the state to our north:

We also see better consensus between the various ensemble members. The surface low location forecast for Tuesday evening from the other day showed a large spread in solutions, with the mean near the sweet spot for snow across Northeast Colorado, but a number of members pretty far north as well:

Today we see the mean is much further north, and also the members are much more tightly clustered around this solution, meaning there's greater confidence in this track.

The forecast
Before the "main event" early next week, we see a system swing through the region tonight into Sunday. Looking at the GFS we see the chance of snow focused across the high country with rain and lower elevations. Perhaps a few showers for Northeast Colorado, including the Denver area, but the main impact from this system for us will be more WIND.

The blend of models shows where we are likely to see some of that snow accumulate tonight and Sunday morning:

If we look at the hourly forecast for Denver we see a slight uptick in precipitation chances tonight and early Sunday, but nothing amazing. Temperatures will be well above freezing in the city, and the wind will be gusty at times!

As the next system moves through early to mid next week, we see the chance of showers remain in the forecast across the urban corridor, but through midday Tuesday not all that much to worry about.

Through Wednesday the NBM shows an inch or so of snow across the Plains, but the bulk of the snow is in the mountains then north of the state.

Given the above, is there still a chance we see accumulating snow this week? Yes, a chance. There's actually a secondary system for later in the week that some models bring a bit further south that could also help that idea as well.

As for the system moving through Tuesday and Wednesday... odds are decreasing that we'll manage any significant precipitation across Northeast Colorado, with some models coming in nearly completely dry. There's time for fluctuation in the track, and perhaps a nudge south in the data, but for now guidance, including the ensemble models, are hedging too far north for our area to see much appreciable rain or snow.