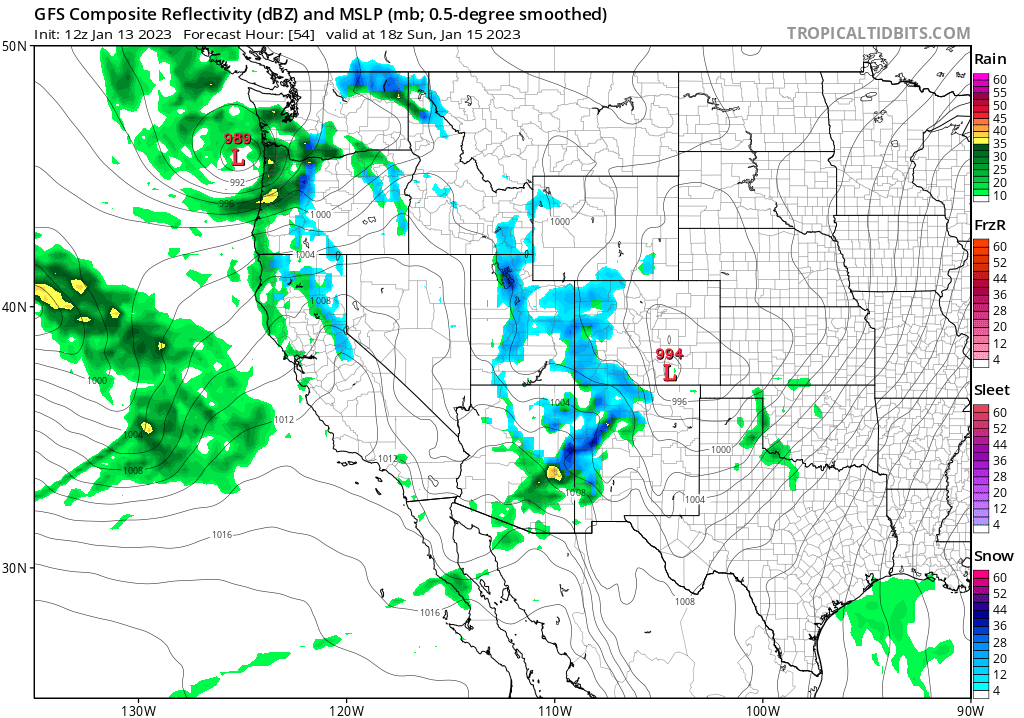 Colorado weather: Two storm systems to deliver rain and snow to state during the coming week

There are a couple of storms expected to impact the state through the next seven days, the first arrives this weekend and the second toward mid-week.

Let's start with the first.

Here it is depicted by the red L over southeastern Colorado midday Sunday.

The blue colors you see over the western half of the state represent snow. Within a few hours, the storm is high-tailing it east into Kansas, but we do see some rain (green) and snow on the map for the Front Range and Plains by this point.

With that general setup in mind, a speed change or subtle position change could increase the chances for rain and snow showers in the metro areas and increase the amounts we would get. I'd put that possibility as well-below 50/50 based on data throughout the past week. With this consideration in mind, let's be more specific on timing and impacts here at home.

First off, the timeline for rain/snow showers in Denver.

Those chances are pretty low end reflecting the current speed and position of that system.

When it comes to impact, across the state we may see winter weather areas for a lot of us, with the higher impacts coming to those in the mountains.

That's just a few hundredths possible in metro areas, upwards of a tenth of an inch on the plains, but the southwest mountains may have pockets of one to two inches of total water!

In terms of snowfall, through Monday we have these general ranges.

With that said, here are the temperatures throughout the weekend for Denver.

That's pretty mild Sunday as the storm system passes through. What about temperatures following the system? There's a bit of a drop, not much of a cool off coming.

Take a look at the second dip in temperatures, Wednesday. That's the timing of the second system we will track. Let's look at that one now.

By Wednesday morning, another system (the center shown with the red L over the Texas Panhandle) is following a similar track to the one we just discussed. Based on speed and position, the impacts will be lower on the Denver and Fort Collins areas, but higher for southeastern Colorado. This system has looked much more impactful from time to time depending on the modeling one looks at. The image shown just above is one of the weaker projections of that storm by the same model.

If the speed and path change, that system can grow into a much bigger impact for the state and metro areas. We could be talking about the difference between a minor amount of snow and several inches based on the ultimate storm movement. Here are the latest daily chances for showers in Denver through next week:

The mountains will receive fresh snow regardless, with lower end totals being four to eight inches and, if there's a path change, one to two feet will be possible. At this point it does look like the southwestern mountains will catch quite a bit of snow from both storms, so will be hearing from some ski resorts that they've easily picked up double-digit totals there in the San Juans by this time next week.

You can bet we are watching that mid-week system and will have updates for you throughout the days ahead.

If you've been wondering about the status of La Niña, given the wetness of the West recently, the latest forecast calls for a quick drop to only 14% likelihood of La Niña hanging on until Spring. More on that in this video.

For Insiders and Pros, a discussion on why that ENSO transition may take some time.