This week's SOTA has a comprehensive look at the storm approaching for Tuesday and Wednesday.

To follow up, here is how things stand as of Monday evening. Here are the key players: speed of the system, temperatures, and wind.

I'd like to add emphasis that a) some areas may not wake to snow on Wednesday morning b) considerable dry-downsloping is possible c) a blizzard warning implies WIND + snow, not huge snow totals d) this is not a snow lover's dream e) I-70 east may be a good route to avoid Wednesday.

Speed
Based on a strong consensus between the NAM, GFS, ECM, and GEM, the speed of the system still appears to be fairly fast. The duration of precipitation for any one location on the Front Range is 6 to 12 hours.

The timing for snowfall (possibly a brief rain/sleet shower first) in the Denver area remains late Tuesday evening through around 8 am Wednesday morning. For those to the north, i.e. Fort Collins, there could be rain initially then changing to snow in the evening, sometime after 6 pm, then all activity clearing before 6 am.

Temperatures
Temperatures will be warm Tuesday prior to the system's arrival. Upper 50s and lower 60s across the city, but clouds will be on the increase during the day and you will feel a sudden temperature drop as a north wind blows in with the system.

Using BUFKIT to view our Denver profile, the temperatures will cool quickly enough that any initial rain/sleet will not last long. The column temperature is cold enough to support snowfall for the majority of the event. Wednesday remains chilly, middle 40s for highs following the heaviest snowfall, which will be clearing to the east quickly in the morning. 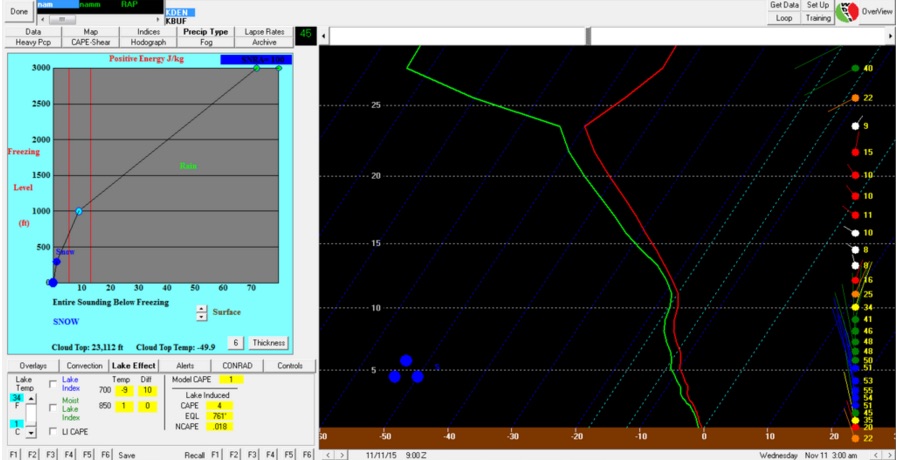 The wind
As the system approaches later Tuesday the wind will increase markedly. Strong gusts from the north to northwest will push in the colder temperatures needed to make any precipitation fall as snow. The wind will create blowing snow and possible blizzard conditions on the Plains. Remember, a blizzard doesn't depend on how much snow but rather is defined by significantly reduced visibility due to WIND-blown snow. The National Weather Service has issued a Blizzard Watch for much of the northeast Plains in preparation for this. The Watch goes into effect Tuesday night and expires Wednesday morning. The Watch area does not include Denver proper at this juncture. That said, wind chills Wednesday morning could possibly be in the teens at times, even in Denver proper, so you'll want to dress warmly for the day. 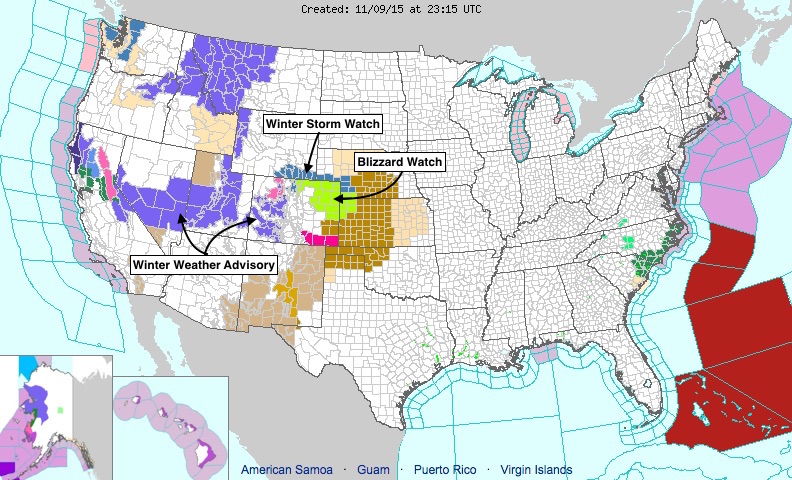 Important to note: most models keep wind direction coming from the north to northwest for much of the duration of the system, which indicates a downsloping wind for those north and northeast of the city. This will keep snowfall totals "down" for those on the Cheyenne Ridge.

Meanwhile, a north to northwesterly wind is an upslope wind for the Palmer Divide. Arapahoe, Douglas, Elbert, and Lincoln Counties could see higher snowfall totals as a result.

The strength of the wind still a bit uncertain. The stronger the wind the more the effect on the location of highest totals and/or creating the lack of much snowfall at all. 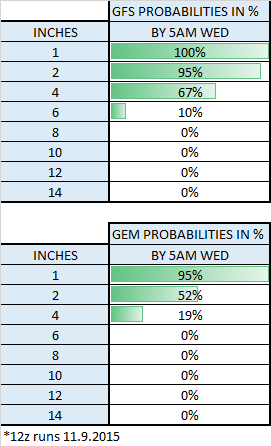 Using this as a bit of a guide and applying similar probability methods to all other locations, we feel that this system will produce snowfall along these lines:

You'll note the Bust Index remains high for the Denver area, due in mostly to the concern of downsloping winds killing snowfall early for folks immediately adjacent to the Front Range. Should these concerns come down over the next 24 hours, look for adjustments to be made to the Bust Index.

There's plenty to track over the next 24 to 36 hours, and for many this will be the first snow of the season. Be sure to stay with Weather5280 through the duration of the event, and subscribe via email if you haven't already.