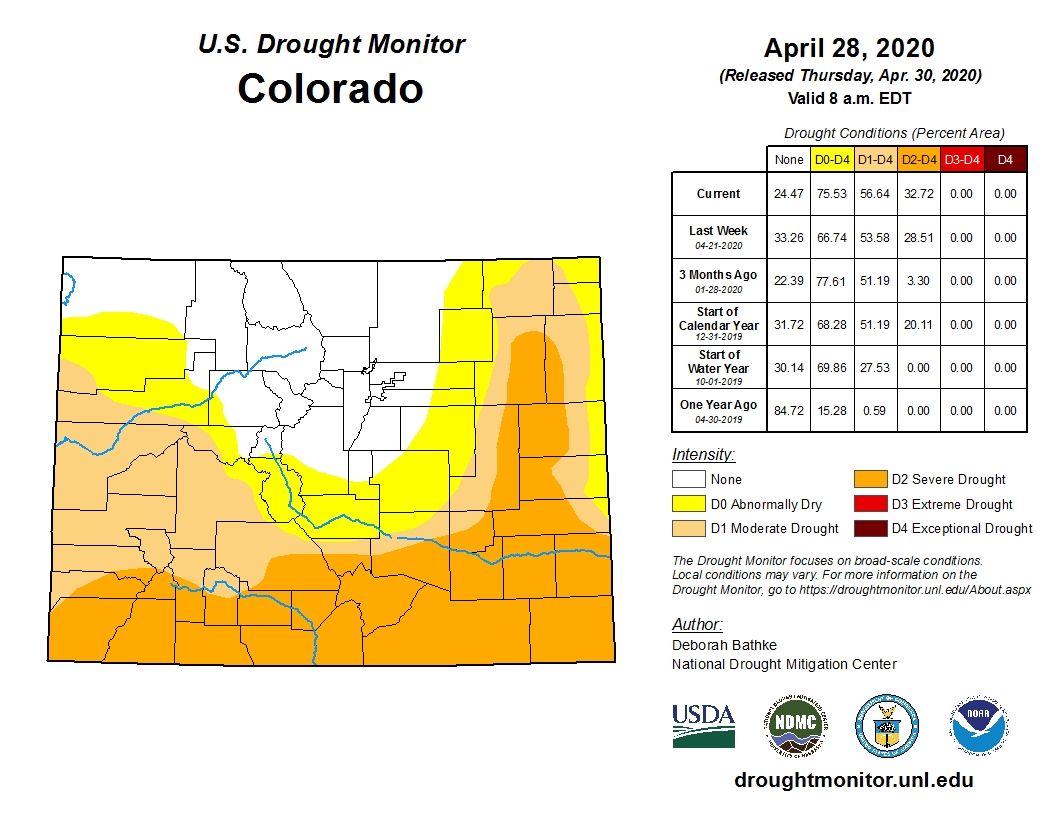 For many of us in the state, this winter has been quite snowy. For a lot of mountain areas, it’s been a good snowpack year. So it might be surprising to know that some areas of our state are in increasingly severe drought.

As of April 28, 32% of Colorado is experiencing severe drought (D2) conditions. How did we get here? One year ago in May, the U.S. Drought Monitor depicted a blank map for Colorado. For the first time in Drought Monitor history (back to 2000) there was no drought or abnormally dry conditions across the entire state.

The glorious lack of dry conditions didn’t last long. Following a hot and dry summer, the Four Corners didn’t get the benefit of monsoon moisture. And in the Eastern Plains, timely precipitation didn’t arrive for the planting of winter wheat. Abnormally dry conditions spread across the state. By the end of October, over 80% of the state was in a D0 (abnormally dry), D1 (moderate drought), or D2 (severe drought) category.

As winter progressed, snowpack in the San Juans limped along, struggling to keep up with average. There followed a nice boost of snowpack for most of our mountains in late winter, resulting in decreased area in drought. Statewide snowpack got to near average peak. But for the San Juans, snowpack peaked a bit early (and a bit low), and the snow has shut off in April. Because of the dry soils at the start of the cold season (remember that lack of monsoon?), water supply forecasts for this summer were already a bit lower. As the snow melts, the first “bucket” it fills is soils. As this dry April progressed, those water supply forecasts (into reservoirs like McPhee and Blue Mesa and ultimately Lake Powell) decreased further.

For southwest Colorado and the San Juan mountains, we’re not at the level of concerning situation as we were this time in 2018. There will be a little boost in water supply, and hopefully not as much demand on it as 2018. But it will be a hard hit for an area that’s still recovering from one of its worst droughts in almost 2 decades.

The Eastern Plains and San Luis Valley are also getting hit with drought. A lot of our plains are covered in winter wheat. So, if it’s planted in the fall and then goes dormant, why do dry conditions in the winter matter? Without any moisture in the top soils, winds can easily strip the vegetation. Seeds get blown out. Dust storms become common. Vegetation across much of our state is stressed, and satellite products used to monitor water (like NASA’s GRACE) and vegetation (like VegDRI below) are showing the dire effects.

Farmers are already reporting losses on winter wheat crops this season. And as dry conditions continue, planting during the growing season also becomes a concern. As we watch our trees and grasses spring to life, there are areas of our state where the vegetation is struggling to grow. CoCoRaHS, a volunteer network of precipitation observers, also keeps track of on-the-ground impacts through Condition Monitoring. Here’s a report from near the Great Sand Dunes earlier in April.

The bad news is, impacts from drought conditions are expected to continue, and possibly even intensify, as we head into summer. Crops are likely to continue struggling. Without ample and continuous precipitation soon, ensuring that livestock have enough food and water becomes more challenging.

But we do have some positives to remember - most of our state’s water supply will see some benefit from winter snowpack; urban areas are in a better situation, which helps to reduce demands on municipal supply; and the average snowpack season will hopefully keep large wildfires from becoming an issue (a big concern when mountain snowpack is bad).

As we enter the month of May and approach summer, let’s hope for some good soaking summer rainstorms and a strong showing of the monsoon in July!