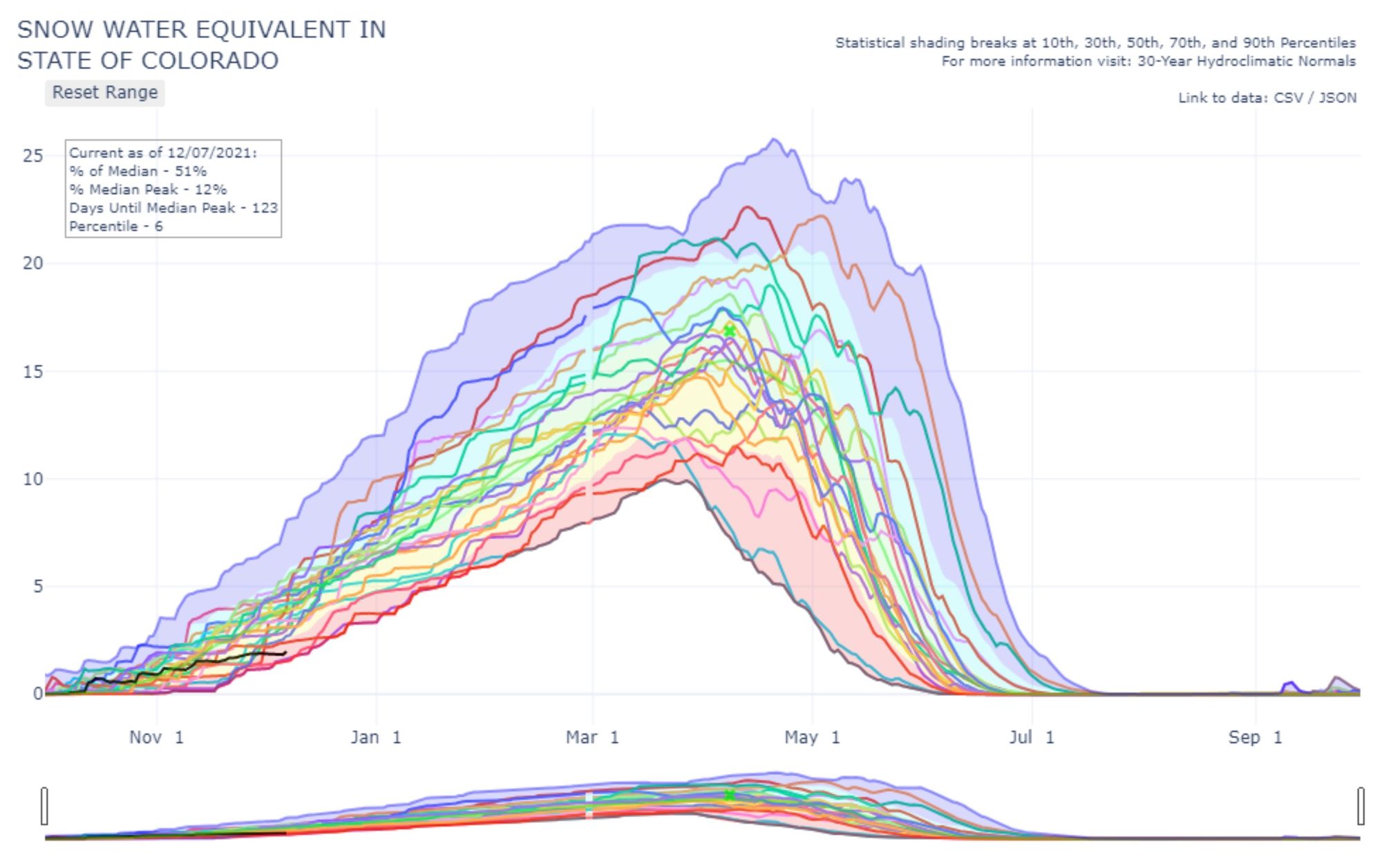 Perspective on this slow start to the snow season

Talking heads and headlines have focused on the slow start to the snow season for Colorado and Denver. For Denver, it's garnered national attention:

For Denver, we await the official first snow of the season. This season has totally smashed the prior record-latest snowfall of November 21st, which occurred in 1934. We see that later this week may be a chance to get the city's first snowfall, however, one shouldn't be shocked if Denver continues to wait. Reminder: 0.1 inch is the threshold for measurable first snowfall, which must be measured at DIA to make it into the city's official records.

Further, the time between the last snowfall and the anticipated next one is noteworthy, too. We've waited 230 days thus far, second longest streak on record, trailing 232 days which is the record from 1887.

Granted, that is some great attention-grabbing statistics, yet, some of the headlines out there say, "experts are worried," and the next blurb you'll come across will say, "experts say it is not time to worry."

Let's sort through the opinion and see what the data show.

An overall view of the snowpack for the West shows a lot of deficit.

Colorado: Looking at total precipitation for the water year to day (October to present) the state is in its 17th percentile with 73 percent of median precipitation through December 7th.

In terms of snowfall, we, as a state, are in the lower percentiles. 6th percentile snow water equivalent is reported as of December 7th. The following chart shows the period of record for Colorado and I've included separate lines for all years since 2000.

This is interesting considering fall has trended wetter since the 1800s for Colorado, but it's hard to see that if you only look at the past couple of decades.

Remember the piece I wrote the discussed the long-term climate shifts for Colorado's Precipitation:

The chart above shows a timeline through mid-December. Let's expand it to the full timeline and see how the snow seasons progressed.

Now, look at how many different outcomes played out from those years. Many climbed above median into the higher percentiles. Many trended right near the 'meat of the curve.' Others remained in a low trajectory for the entire season.

From a historical perspective, a slow start to a snow season does not correlate to the rest of the season. Our recent worst years: both 2000 and 2013 eventually got back to near average by the end of the season, so just being a slow starter does not imply the season is lost.

From a forecast perspective, there are some considerations, however. We have a pronounced La Nina pattern this year where a ridge has dominated the weather pattern of the western U.S. That is not a good setup for snow. That ridge and sea surface temperature patterns of the Pacific have prevented much of a flow of moisture from near Hawaii toward California. The lack of southern jetstream is concerning for snow lovers in conjunction with how this year's La Nina is panning out.

If you take our chart from above and look at strong La Nina years, let's see how they pan out:

Since 2000, water years with La Nina have a wide variety of outcomes. Granted, La Nina years are different and shouldn't be directly compared on the basis of tropical Pacific Ocean temperatures alone. However, there is merit to the data's indication that even La Nina years can still produce a lot of snow for Colorado.

We do not want to repeat 2018, however, which was a dismal snow year. Given how this year's La Nina is behaving thus far, and with that significant ridge over the West, 2018 may not be wanted but may be a similar outcome; time will tell.

So, there is some hope for Colorado. What about Denver?

The start of the 2021-22 season has no snow recorded thus far, we know that. Let's see the fifteen least snowy seasons to date:

That's not a bad historical perspective to show that Denver, too, can end up near average to above for snowfall even after a very slow start. Take 1982-83 as an example. Only 4.1 inches of snow through the first week of December, then the Christmas blizzard hit as well as a big snow in March of '83 to make that a memorably snowy season. On the other extreme, you do see 2016-17, 2010-11, and 2017-18 which were awful snow seasons for Denver.

Hopefully this piece gives you some perspective as you sort through the headlines.