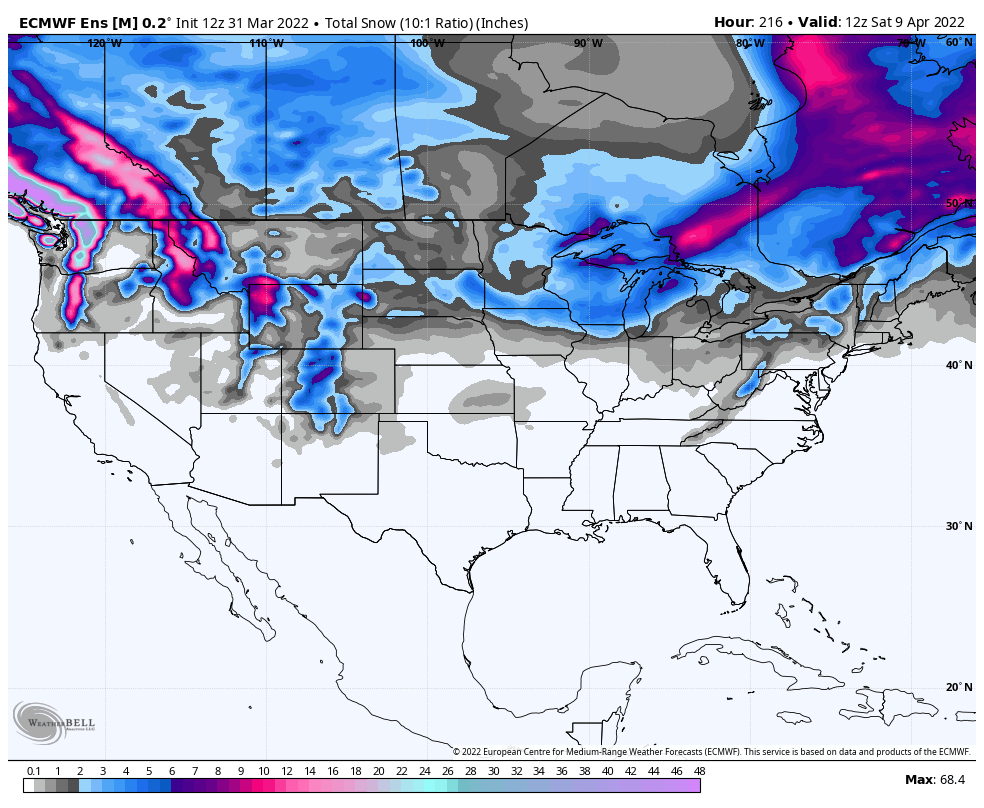 With our latest round of snow behind us, let's look ahead to the end of the week and weekend as mild air returns to the forecast for many of us, but another system (or two) await in the wings.

First, snowfall totals over the last three days shows appreciable snow for much of the mountain regions with a good results for our forecast across our area. Some of the foothill locations west of Denver did in fact manage several inches of snow – about 3.5" in Evergreen, for example – but across the Denver area and northern urban corridor, not much snow was recorded. The Palmer Divide saw some pockets of heavier snow, and of course for some areas that didn't see the snow, some good rain was received!

The next system on the way moves through this evening and overnight, and will bring with it another round of mountain snowfall but little impact as for precipitation across the Eastern Plains.

Snowfall totals from the NBM shows main of the higher peaks could see several inches between now and Sunday evening, most of that coming tonight. The south-central mountains could see the best snowfall with the passage of tonight's system.

A few showers could peel off the hills but the likelihood of this occurring looks low, and if it does the impact should remain low.

Temperatures will cool a bit from today's highs on Friday with the passage of the front, but we should still manage the mid to upper 50s across the urban corridor, before climbing back into the 60s Saturday.

The Euro temperature forecast for Denver would support this idea, with highs in the mid 60s on Saturday, before another front cools us a few degrees Sunday. Nothing terribly cold on tap as we start April:

Another system moves through Sunday afternoon and overnight. At times models have shown a bit better chance for rain across the urban corridor Sunday PM, but it's not at all clear that this will come to fruition. You'll note in the hourly planner above we see precipitation chances increasing toward the end of the 3-day, so something to watch for as we head in to the weekend.

A stronger trough may bring cooler temperatures to Northeast Colorado by early next week, but details remain vague. Right now it doesn't look particularly wet, but the northern mountains could be favored for more snow in the Monday through Wednesday timeframe under a northwest flow aloft, and the Northeast Plains look likely to see a couple days of cooler than average temperatures.

April is Denver's second snowiest month on average, so don't put those shovels away just yet. Looking at the European ensemble mean snowfall forecast through the first full week of April it doesn't show much potential for snow across the Plains, but a better look for the mountains as we discussed. Still, a relatively active storm track across the CONUS, and a climatologically snowy month means it's good to watch the forecast in case that changes!