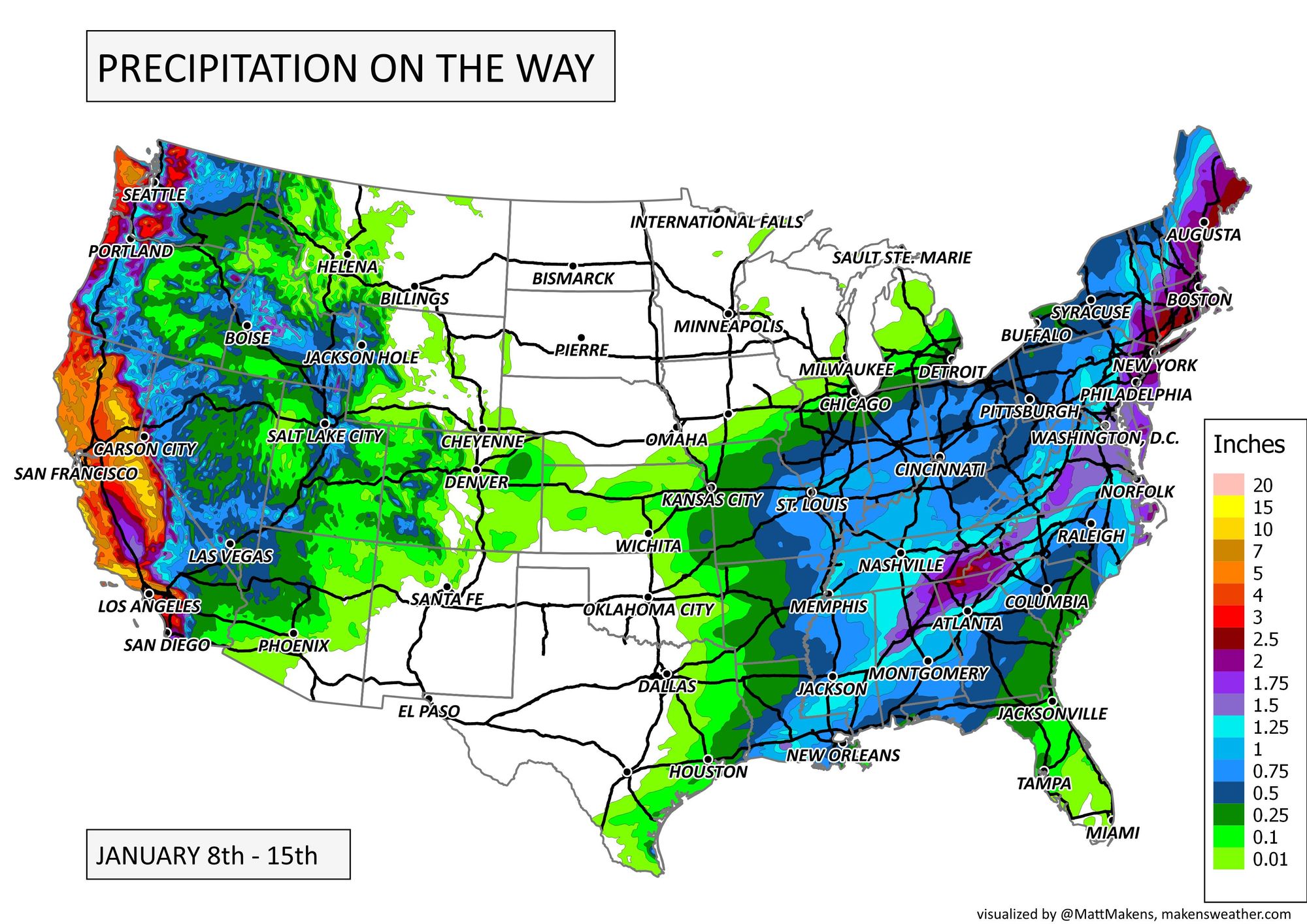 Colorado weather: Midweek snow on the way for the mountains and parts of the Denver metro area

Let's prepare for the week ahead in today's State of the Atmosphere by discussing the next weather maker for the state which arrives midweek to bring snow and rain to the region.

We've discussed the latest surge in the Atmospheric River at length and what impact it will have on the state in this latest occurrence.

The idea here is that impacts will remain somewhat minimal, especially as compared to our neighbors to our west, and this remains the case this week with the most active storm flow to hit the West Coast and also some moisture back east which leaves Colorado in the middle.

VIDEO: Click for the latest video discussion of our weather pattern and hazardous weather areas for the next two weeks.

Let's first watch an animation which shows a a couple storm systems develop in our region, pass through, and head east. The second such system has the greatest impact potential to the west and to the east with a lower impact, as it appears now, on those in our area.

That animation runs through the week, so let's look at total precipitation for the week across the States. That widespread moisture over the western states may tally more than 10" of total water for the week!

For snowfall, let's look at the next three days, which for some is quite impressive with more than 4 feet of snowfall possible in parts of the Sierras!

Now that we've 'set the stage,' if you will, let's zoom into the state.

The moisture totals projected below are pretty much confined to Tuesday and Wednesday, with mostly dry days expected the remainder of the week. For the mountains, between 0.5 to 1" of total water is coming, and perhaps a bullseye of heavier precipitation on the Plains too. For Denver, it's early to be specific but somewhere between a trace to 0.10" are possible this week – possible, not set in stone by any means as many areas may stay completely dry.

Just as a general idea, snowfall projections don't deliver much to the metro areas or Plains. The mountains may have ranges hitting 18-24" through mid-week, though.

Below are two examples. We will be more specific as we get closer.

We see some moisture ahead, but data through this morning (Sunday 1/8/22) remain indicating low-end chances for the metro areas and Plains.

As we look at the chances timeline for Denver we'll see when such showers may move through. Right now, the highest chances for some showers arrive Wednesday but we may see something develop as early as Tuesday. We will provide you updates on this system as it approaches, including detailed timelines and snow forecasts - Subscribe now and we'll email you when there's an important update.

That timeline is only through the first half of the workweek, so let's look at the next 10 days to see if we don't have additional precipitation chances ahead. We have some lower end probabilities return late next weekend. This 10-day precipitation board is available to Insiders and Pros here.

Overall, we see a relatively quiet weather pattern for Denver. As such, the temperature outlook for the week is also relatively quiet, with just a little dip from Wednesday to Thursday.

This weather pattern from December into January has been a great one for water and in our drought improvement from the snowpack. For more on that, check out our latest update: