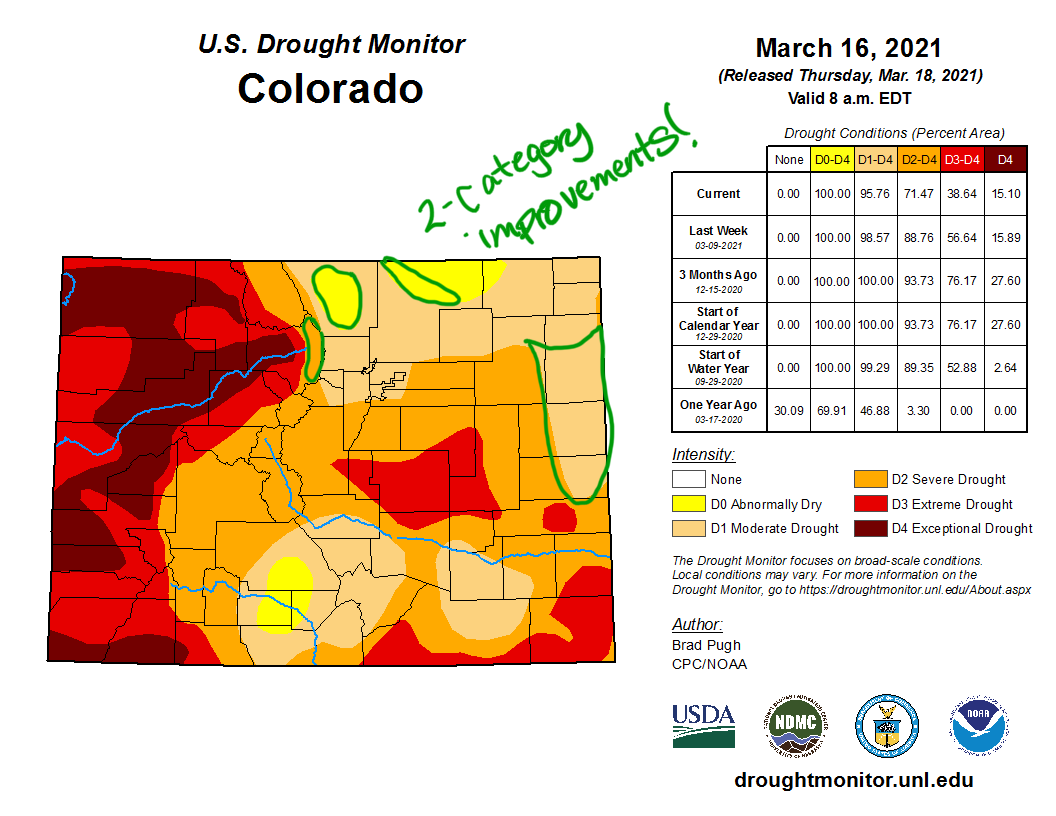 Did the March 2021 snowstorm improve drought conditions across Colorado?

Almost immediately after our major snowstorm wrapped up this weekend, the calls and emails started coming into the office on Monday morning. So many questions swirled around how extreme this event was, and most importantly, what does it mean for snowpack and drought. So here, I answer the major questions everyone has been asking.

Did this storm help snowpack?
For some areas, yes, but not as much as you might think. This is a good reminder of two facts – first, what happens in our low elevation cities isn't representative of what happens in the mountains; and second, that pesky Continental Divide gets in the way of a lot of storms being beneficial for both sides of the state!

While this storm packed a major punch in terms of snowfall totals and liquid for our low elevations, it wasn't as extreme for the Front Range mountains. While they did get a lot, they're supposed to get a lot. 20-30 inches in our cities puts this storm at way above our average. At the same time, 30-40 inches in the mountains is good, but not quite as extreme. However, the high elevations east of the Divide did see a nice boost in snowpack (that's the amount of water in the snow). Check out the snowpack for the Arkansas basin.

On March 13, snowpack was an inch shy of the average and at 89% of average. The basin gained 1.6" of snowpack and on March 17 was at 102% of average. With 24 days to go until normal peak, snowpack is in good condition for the Arkansas basin, and the neighboring South Platte basin to the north.

Now let's look west of the Divide. Below is the snowpack time series for the Colorado headwaters basin. For the same time period, snowpack increased from 84% of average on March 13 to 89% of average on March 17. You might think 89% of average doesn't sound so bad. Well, that's a one inch deficit still. And with less than a month to go until normal peak, the likelihood of getting a normal peak snowpack is pretty low for the Colorado headwaters. In fact, if the basin gets average snowpack for the rest of the year, they'll peak with a 3 inch deficit and that could increase the likelihood of an earlier meltout.

For all the basins west of the Continental Divide, this is an issue. Thanks to the drought, soil moisture deficits are high, and reservoirs are lower. We need above average peak snowpack in these basins to cover those deficits and bring us back to normal. That isn't looking likely now.

Here is a look at the current snowpack across all Colorado basins following the big storm:

Are we out of the drought now?
Well, not quite yet, but we're heading in the right direction! The key here to remember is that drought relief is incremental. It very rarely happens overnight (or from one storm). And even when some indicators show vast improvement, there are many long-term impacts that may still remain. Matt Makens gave a great overview of the magnitude of improvements in some indicators.

The latest U.S. Drought Monitor map, released this morning, shows widespread improvement across the eastern half of our state. The biggest improvements were to D2 and D3 areas. D3 coverage (considered extreme drought) was reduced by almost 20%. The percentage of the state covered in D2-D4 decreased from 89% to 71%.

Also quite notable, there are a few areas of 2-category improvements. This is a rare action by the Drought Monitor and highlights how anomalously wet this storm was. Other storms that have warranted 2-category improvements in a single week in Colorado include the March 2003 snowstorm and September 2013 floods.

In Burlington, Colorado (on I-70, a few miles before the Kansas border), precipitation deficits have been building since the beginning of October. Precipitation was at 62% of average. A deficit like this is not something you can make up in the cold season. It's usually a larger summertime event that brings you back to average. Over the course of three days, they received 2.97" of moisture. It would normally take them from October 1 to February 19 to accumulate that much moisture! Their wettest month on average is July, when they normally get 3.05" of precipitation. A mere 0.07" more than they got from this one storm. Thus warranting a 2-category improvement from D3 (extreme drought) to D1 (moderate drought).

What does this mean for the summer?
In terms of water... What's the chance of watering restrictions? Well, it's complicated. For our Front Range cities, we live east of the Divide but much of our water supply comes from west of the Divide. As alluded to before, our western basins aren't in nearly as good of shape. How that all shakes out this spring will help determine a lot about our municipalities' water supplies for the summer. Keep in mind though, that a lot of the state will still be in drought and reservoirs experienced extra demand last summer and fall. Water managers remained concerned about supply, and if what we get from this year's snowpack is below average again, watering restrictions could still be in our future.

In terms of fire... Nobody wants to see a fire season like last year. Long story short – the longer we keep the snow around, the better. Wildfires are a natural part of our ecosystem and we can expect them every year. But droughts do tend to result in larger wildfire seasons. For our forested and mountain areas in the South Platte, Arkansas, and Rio Grande basins, we're in good position right now. Snowpack is at or above average. If things continue on that trajectory, this will lower the risk of large wildfires during our normal peak season in June. I'm starting to sound like a broken record, but west of the Divide, the risk may be higher. Getting more snow accumulations, a normal timing for peak snowpack, and a nice and slow melt would help mitigate that risk. Only time will tell. Currently, the San Juan basin is in the worst shape (in terms of drought and snowpack conditions), and it is more likely that their risk of large wildfires will be high this summer.

In terms of summer precipitation... That's anybody's guess. Our state experiences a lot of variability in summer precipitation. What is a guarantee is that some locations will probably get some wonderful summer soakers. Another guarantee is many hot temperatures. Will we get our monsoon season in the late summer? Cross your fingers that we do. We've had four years in a row now where the monsoon has failed to bring adequate moisture to Colorado. That is an important ingredient in drying soils out and keeping drought around. Last year's lack of monsoon also helped drive the late season wildfire outbreak. Let's hope we break that streak this summer!