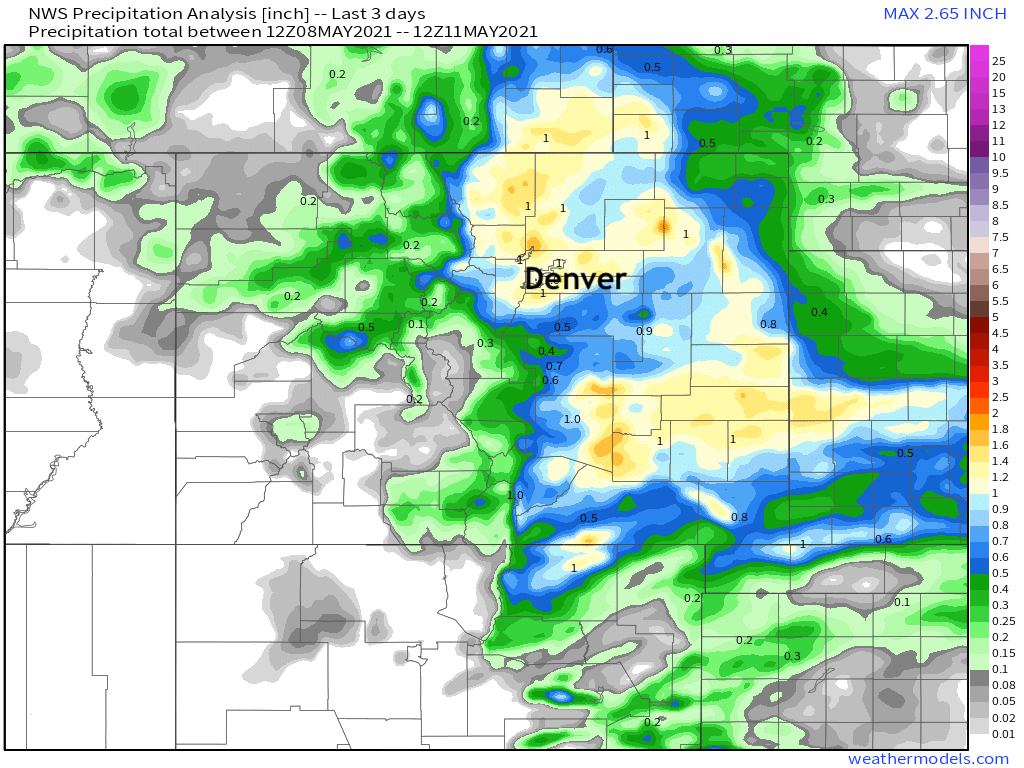 The best part about our most recent round of wet weather was that it included a good portion of Southeast Colorado, which has largely missed on many of the recent events that have delivered a wet spring to the northeastern portion of the state.

As we've covered on many occasions in recent weeks, the state of the drought across the state hasn't improved much outside of Northeast Colorado, and even with all the wet weather most of the state is running a deficit over the last year. This last system will continue to help improve drought conditions for those east of the Continental Divide, but in most cases there's still work to be done!

Precipitation totals over the last three days range from 0.5 to 1.5" across the eastern half of the state, with quite a few areas in that 1.0" range. Take a look at all that water across the Southeast Plains!

The snow worked out about as expected, with most accumulation confined to higher elevations. An impressive burst of snow on Tuesday (which lead to a Snow Squall Warning across the Palmer Divide) delivered in some cases several inches of wet, slushy, late-season snow to the east-central plains of Colorado.

Interpolated snowfall totals shows where we saw accumulation over recent days. Most of the Denver metro did not, but some cities along the northern urban corridor did pick up a couple of inches, mainly on the grass and other raised surfaces. Between Denver and Colorado Springs and points east we saw a bit better accumulation:

For all that garbage models were printing out with snow accumulation this week, I suppose we can give the GFS some credit for having a decent idea on where the heavier snow across the Plains would set up – just needed to divide the output by 5 or 10 in most cases. Here's a look at the snowfall forecast from the GFS for the 20 runs leading up to this event:

Looking ahead
We begin to warm up again today. Most areas will remain in the 50s today, but some low to mid 60s are not out of the question across eastern Colorado as our weather turns milder.

Here's a look at forecast highs across the region for the next week:

Even with the milder weather, it won't be an all dry forecast. Most afternoons will have showers and storms in the forecast, this being especially true for the weekend, as today and Thursday look generally drier.

Still, if we watch the animation from the GFS for the next 10 days or so – what we see is a notable lack of BLUE across Colorado, which perhaps means more rain than snow as we move through the middle and latter half of the month.

Finally, here's the hourly planner and forecast for the Denver area. A nice stretch of 70s ahead, but be mindful of those afternoon storm chances as we head to the weekend, and remember: when thunder roars, go indoors!