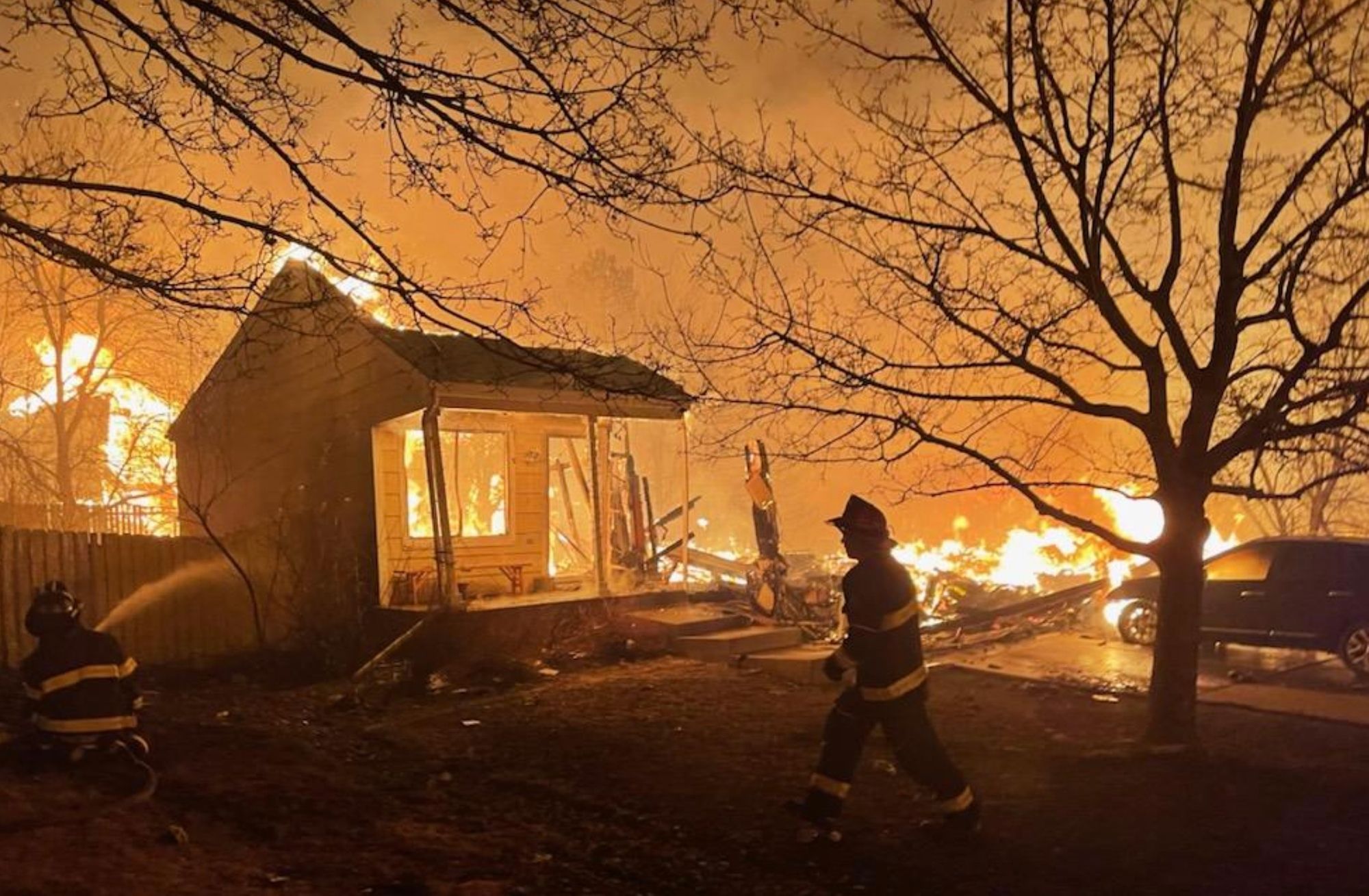 Colorado's most destructive fire a result of extreme winds, expanding wildland-urban interface, and a stressed climate

A combination of factors lead to an urban firestorm in Boulder County
Thursday's wind and subsequent firestorm that ripped through the suburbs of northwest Denver have left us all feeling some degree of helpless and awestruck in its aftermath.

While the extreme wind from the downslope or Chinook wind event on December 30th was a key ingredient to a fire that quickly grew out of control, it couldn't have been possible without the backdrop of one of the region's warmest and driest six month periods on record, and without the ongoing rapid urban development deeper into the region's wildland areas.

Exceptionally dry
Since June, the Denver area has experienced one of its warmest and driest 6 month Jun - Dec periods on record. In Denver, just 1.92" of precipitation has been recorded since June 1st, beating out the previous record set in the back half of 1939 which saw just 2.72" over the same time period. The mean temperature of 61.8°F in 2021 looks like it'll land us as second warmest for the period with 1933 coming in at 62.0°F.

Season to date, (ending December 3oth the date of the Marshall Fire), Denver recorded just 0.3" of snow where on average the city picks up 20.5" by the end of December! This year marked not only Denver's latest first snow on record, but was the least snowy through the 30th as well.

The chart below, prepared by atmospheric scientist Russ Schumacher in Fort Collins, illustrates what a remarkable outlier the last 6 months have been for Denver. Looking at the Central Park weather station, where records date back to 1948, the June 1 to December 29th period in 2021 was the warmest and driest by a long shot.

Of course this remarkable stretch of warm and dry weather comes on the heels of what was a cool and wet start to the year for many of us across Eastern Colorado. In many respects this only added fuel to our current situation as ample snow to end last season, including Denver's fourth largest snowstorm on record, promoted vegetation growth along the Front Range which has since dried out.

While we've been celebrating an active weather pattern across the Western United States this December, it should come as no surprise that conditions east of the Continental Divide remain starkly different – with conditions ripe for fire.

A national look at the Evaporative Demand Drought Index (EDDI) shows that across eastern Colorado evaporative demand is at extremely high levels, due to a combination of warmer and drier than average conditions across the region, as well as likely ongoing wind events and dramatically low humidities.

As Weather5280 contributor and Assistant State Climatologist Becky Bolinger points out, the EDDI can also be a good wildfire risk predictor. She says:

The calculations for the product use temperature, relative humidity, solar radiation, and wind. The same ingredients that increase evaporative demand also increase wildfire potential. Typically, when we see areas in red or maroon (near record to record high EDDI) we know the risk of a wildfire spreading out of control is high. All of eastern CO has observed record high EDDI for the last month.

With the dramatic flip from the first half of the year, the drought implications have been notable and swift. The following image prepared by Bolinger shows Denver and the northern suburbs have seen a 4 class degradation in Drought Monitor classes over the last 24 weeks (ending Nov 3oth), just as our mountains have seen some improvement:

La Niña and extreme winds
On the long list of contributing factors to Thursday's event is the ongoing La Niña ENSO state. You'll recall from our 2021-22 Winter Outlook that while Niñas can prove snowy for portions of our mountains, wind events along the Front Range are a hallmark of La Niña around here.

For the plains we see the potential for real cold at times, but even as storm frequency in a La Niña year can be greater than average, they often aren't in ample supply of moisture east of the mountains – providing more wind and cold than anything else.

These Chinook wind events are likely to continue through the remainder of the winter at an enhanced frequency given this fact, so unless we can piece together some moisture east of the hills the fire danger will remain high, despite the time of year we may find ourselves in.

You can see that has pressure dropped at the NCAR station on Thursday, the winds picked up in earnest, a clear correlation for a strong Chinook event:

While Thursday's chinook wind event was well forecast for the foothills of northern Colorado, the extent to which those winds would reach lower elevations along the urban corridor was underdone by modeling and to my knowledge most meteorological forecasts.

Winds across portions of Boulder and Jefferson counties during the time of the Marshall Fire on Thursday were at times in excess of 100 mph. Not unheard of during a strong wind event along the Front Range, but certainly an upper echelon event, particularly across extreme west Arvada (Highway 93 and 72 intersection) where a gust of 115 mph was reported!

Wildland-urban Interface (WUI) and Climate Change
We are fortunate to live in a region rich with incredibly smart and dedicated weather and climate scientists. One leading voice in Western fires and our changing climate is Daniel Swain (@Weather_West on Twitter), he says he sees three pillars to the escalating Western wildfire crisis:

In yesterday's case, I'd say the latter two pillars were most relevant: the expanding WUI, plus climate change. And it's always the case that there are multiple causative factors--you really can't ever point to a singular cause for any given extreme fire event. But a constellation of factors –including, but not limited to climate change – unfortunately came together in a devastating way yesterday.

For perspective, the town of Superior, Colorado which was completely evacuated and saw some of the most property loss from the fire, only had a population of around 250 up until the late 1990s. Yesterday's evacuation of nearly 13,000 people is indicative not only of the rapid growth and expanding wildland interface where this particular fire occurred, but also the risk so much of the region faces in periods of extreme drought and wind (which are inevitable around here, by the way, climate change or not). Imagine if this same wind event happened in late December of 1939 – a similarly warm and dry second half of the year – we would have likely lacked both the ignition source and ultimately the homes to burn. This is why pinning these increasingly impactful disasters only on climate change is a shortcoming, and why this is only part of the (large) equation.

The issues around the risks of wildland-urban interfaces is not unique to Superior or Louisville, but so much of the urban sprawl across Colorado's Front Range, and increasingly across the West on the whole.

While it's true this fire will be the most destructive on record for the state – some estimates put the home lost count near 1,000 – the time-period for which such an event has even been possible is remarkably short. Prior to the year 2000, the likelihood of power lines (if that indeed is determined to be the cause) and the number of people potentially impacted by Thursday's event would have been many fold lower or never even have occurred at all.

The Marshall Fire
Below is a map of the estimated fire extent for the Marshall Fire. The fire started as a wild grass fire, but quickly turned into an urban "firestorm", where the primary fuel for much of the afternoon were the homes and businesses burning. In all, an estimated 6,000 acres were burned by the fire.

The damage caused by the fire is devastating, though thankfully no lives were lost. Hundreds of homes were a complete loss, with the final tally still not known, but some estimates put that number near 1,000.

Aerial imagery from the morning after is nothing short of heartbreaking, and unfortunately as awful as feared during the course of the fire.

A tragic combination of factors lead to fire
What's clear in looking at everything is that the Marshall Fire was the result of a long list of contributing factors, all of which came together the day before our long awaited, and MUCH needed snow, to create the perfect firestorm.

Bob Henson, a Boulder-based meteorologist and writer for Yale Climate Connections, sums this up nicely:

The worst weather/climate disasters tend to be multifactorial—several things going wrong, all at the same time. In this case we had a record lack of autumn moisture, coupled with persistent, unusual warmth (the warmth is a clear long-term climate signal, exacerbating the drought impact). We had an unusually intense and prolonged windstorm, at a favored time of year, and with La Niña in the mix, which tends to be windstorm-supportive in this area. And then you have 40 years of development in the LoSu area, where acres of what were grassland in 1980 are now thickly settled and well-treed. Put it all together and you have the makings of a horrific suburban firestorm.

While much is written and argued over with regard to climate change – the best course of action, how to measure impacts, and how much of our current predicament is to blame on it on a given day – it is clear that our urban and suburban development will demand for us to prepare for extreme weather events in a more thorough manner. Thousands of lives will be impacted from this event, and with more and more people in the path of all Mother Nature has to offer, we will continue to experience tremendous loss without making meaningful change.