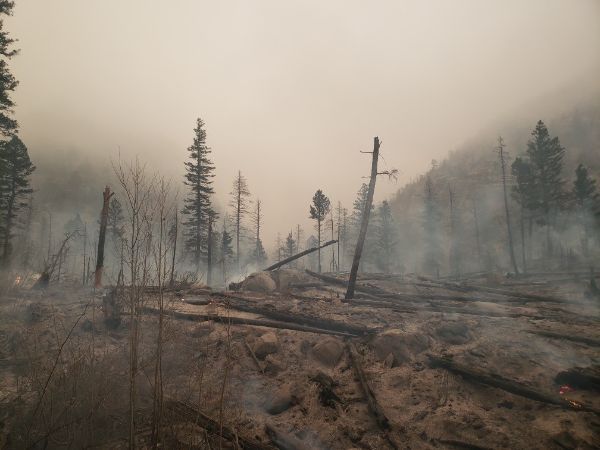 The year has finally come to a close, and I think we can all agree that we don't feel bad shutting the door on 2020. While we welcome 2021, let's look back at some of the most memorable weather and climate events that occurred in Colorado this past year.

June Derecho
Derechos are commonly found in the midwestern to eastern states. While one of the most memorable weather events in the country this year will be the August derecho that wreaked havoc across Iowa and Illinois, there is something quite notable about the June derecho that started in Utah and swept across Colorado. This is the only derecho in modern records to impact Colorado. Damaging wind reports spanned the entire state. In fact, 91 severe wind reports were logged (58mph or greater), beating the state's previous record of 30 severe wind reports on May 22, 2006.

Maximum wind gusts for the state ranged from the 40s to the 70s. The highest wind gust in the state reported for the day was 110mph at Winter Park. Thankfully damage was pretty minimal. But the extreme winds as the storm swept through will remain in our memories for a long time!

Akron Wind Event
Only three days after the derecho, and unrelated to that storm, a thunderstorm with severe straight-line winds devastated the small town of Akron, in northeast CO.

Wind gusts topped 100 mph in northeast CO. The big surprise is that the wind speeds and the damage were not from a tornado, but from straight line winds. Not only did the winds down power lines and trees, it damaged a multitude of farming equipment and a hanger at a local airport.

Record Evaporation
Early June was a rough time for the Eastern Plains. Following a dry winter and spring, croplands were further stressed by a major evaporative event. The event had all the characteristics of a flash drought, with the exception that the region was already in drought at the time. Evaporative demand is a totally normal part of our summers. With a combination of winds, low relative humidity, and warm temperatures, it's the amount of water that the atmosphere wants to take from the surface. But what we saw in June was off-the-charts high. Winds across the central plains of the U.S. were extreme. Temperatures were hot, in the upper 90s, quite impressive for early June. What little moisture might have remained in the soils at the start of summer was quickly stripped away.

Hot August
August 2020 was the hottest August on record for Colorado, dating back to 1895. Warmer than average months are pretty common these days. But to have the warmest on record, during the hottest time of the year, definitely leaves its mark!

The statewide average temperature for August (taking into account all the maximum and minimum temperatures for all locations around the state) is 66°F. August 2020 clocked in at 69.9°F, almost 4° warmer than average. A total of 559 daily maximum temperature records were broken around the state during the month, and 9 monthly records were broken. A high elevation station, Middle Creek, recorded its highest temperature in its history, 85°F on August 2, 2020 and then broke that record on August 4 with 87°F.

100° to Snow?!
In a month that typically transitions us from summer to fall, September 2020 gave us all a bit of weather whiplash. Labor day weekend, September 5-7, temperatures across the Front Range urban corridor and Eastern Plains topped out in the upper 90s and low 100s. On September 6, 2020 the La Junta Municipal Airport recorded a 108°, the hottest September temperature ever reported in Colorado.

A strange word was in the forecast – snow. Many Front Range locations hadn't seen a snow event occur in September in the 21st century. Surely it couldn't be possible with this summer heat? But the forecast panned out. On September 9-10 snow fell across the entire state. Widespread 2-6 inches across the lower elevations with 8-18 inches over the higher elevations. Monte Vista, located in the San Luis Valley, received a whopping 14 inches of snow.

You can read more about this wild week of weather we had here.

Drought
The year started off promising, with snowpack heading in the right direction. In fact, most mountain areas received near average peak snowpack by early April. Unfortunately, April moisture quickly shut off and dry conditions dominated the rest of the year.

At the beginning of January, 50% of the state was in a drought category, according the U.S. Drought Monitor. But no part of the state was experiencing the worst drought categories (D3, extreme drought, and D4, exceptional drought). The December 29 map shows 100% of the state in drought, over 75% in the D3 or worse categories, and over 25% in the worst category, D4. This is the first time since the 2012 drought that the entire state has experienced drought conditions. And unfortunately, although considered very rare (a 1-in-50 to 1-in-100 year event), our state has seen D4 conditions 4 times since the turn of the century.

The biggest ingredients to drive the severity of this drought? 1) early meltout of snowpack, dry spring, very hot summer, no monsoon moisture, warm and dry fall. Let's keep our fingers crossed that our state recovers sooner rather than later from this extreme drought.

Historic Wildfire Season
As drought conditions quickly expanded across the state in the summer, one impact we normally expect surprisingly didn't show up. Our previous drought years (2002, 2012, 2018) were coupled with large and devastating wildfires early in the summer. But June 2020 passed with almost no activity. Then July passed quietly as well. July 31, the Pine Gulch Fire in western CO started. Shortly after, the Grizzly Creek Fire started (and shut down I-70 for 2 weeks) near Glenwood Canyon and the Cameron Peak Fire started in northern CO.

What would soon become apparent is that this wildfire season would be one that Colorado had never experienced before. Instead of June and July being the most active wildfire months, instead September and October would be. Prior to 2020, the largest wildfire in the state's history was the Hayman Fire in 2002 (at over 130,000 acres). And it seemed impossible our state could possibly see a wildfire top out over 200,000 acres.

But as the wildfire "season" came to a close, some tragic new records came forward. Three wildfires, Pine Gulch, Cameron Peak, and East Troublesome would grow larger than the previous state record. The Cameron Peak Fire would become the state's largest on record at 203,000 acres. And East Troublesome Fire would come close, with 193,000 acres. It also holds the daunting title of being the only known fire to jump over the Continental Divide.

A Chilly Take
Despite the heat and drought, we have seen some notable cold events this fall and winter. In late October, 32 monthly records of coldest minimum temperature were broken in Colorado. Hebron, a CoAgMET station located in the frigid valley of North Park, reported a low temperature of -33°F on October 27. This is the coldest October temperature ever recorded in the state.

While we don't know for sure what 2021 will bring, one thing is for certain - we should always be prepared for wild weather and crazy climate extremes in Colorado.